Here’s what I love about cooking: just when you think you know it all about an ingredient or recipe, you discover something new.

I’ve tried Brussels sprouts every which way. I’ve steamed them, sautéed them, shaved them and eaten them in salads and slaws. I’ve turned them into hash, latkes, and even a nutritious, crispy salad topper.

Most often, I roast my Brussels sprouts. Even within this preparation category, I’ve tried countless different marinades and seasonings. I’ve played around with temperatures and roasting times, par-cooking prior to roasting versus not.

What I’ve learned is that I like a simple Brussels sprout preparation. Salt, pepper, oil, heat: it’s usually enough for me.

Recently, however, I became tempted by the idea of a new approach to Brussels sprout roasting, just in time for Thanksgiving. Everything I thought of, at first, was reminiscent of something I’ve already tried: herb blends, a mustardy glaze, something with vegan bacon.

Then I thought of miso, which I love for its saltiness and subtle savoriness. The idea of making vegan miso butter has been knocking around my brain for a while now. That’s how these miso butter Brussels sprouts came to be, and they are unbelievably delicious.

A friend of mine, who tasted the recipe, labeled them “possibly the best Brussels sprouts I have ever tried.” I’m always hesitant to throw around the word best, but I have a hard time disagreeing with her. At the least, the sprouts are a little victory, and I’m so happy to share them in time for the holiday season.

What is miso butter?

For the miso butter Brussels sprouts, I melt the butter and then whisk it with the miso paste. This makes it easier to glaze the raw sprouts with the butter prior to roasting.

I also add maple syrup to the glaze, which is another place where it diverges from traditional miso butter. The syrup adds some of the salty sweetness that I love so much for roasted autumn and winter vegetables. It balances the saltiness of the miso paste perfectly.

What type of vegan butter should I use?

It’s up to you! I think most any vegan butter brand will work nicely here. I use Earth Balance sticks for most cooking and baking, though I enjoy trying new and smaller brands as well.

What type of miso should I use?

The three types of miso that you’ll most commonly find in stores are red, yellow, and white miso.

Red miso is generally the saltiest. It has a strong flavor, a little funky. It is the type of miso that I use the least often, though it can work in really hearty stews or braised dishes.

Yellow miso is less salty than red miso and fairly adaptable. I use it sometimes, though white (shiro) miso is the variety that I use most often.

White miso is sometimes labeled as “sweet” or “mellow” miso. It ferments for a shorter time than red or yellow miso, and while it is salty, it’s not as assertive as the other two types. It does have a very subtle sweetness, which is part of what I love about it.

I use white miso in soups, carrot miso butter, my miso tahini sauce (and this sandwich), soba salad, and more. I love that it contributes saltiness as well as umami to food.

That’s certainly what it does for the miso butter Brussels sprouts!

This is a simple recipe, which makes it a good antidote to extensive and laborious holiday cooking.

You’ll begin by heating up your oven and lining a baking sheet with parchment. Trim and half your Brussels sprouts (if you have giant sprouts, then quarter them).

Melt your butter and whisk together the miso glaze. Place the sprouts on your prepared baking sheet and pour the glaze over them.

The glaze is thick, so you’ll need to use your hands to distribute it evenly and coat the sprouts well.

After this, all you need to do is roast the miso butter Brussels sprouts. Be sure to stir them on the baking sheet once halfway through roasting. This will ensure that they brown and crisp up evenly.

The miso butter Brussels sprouts can be prepared up to three days in advance of eating.

While you can reheat them in the microwave, they’ll benefit from being reheated in the oven. This way, you can both reheat them and re-crisp them at the same time. I recommend reheating the sprouts for 10 minutes at 350F, or until they’re nice and hot.

While I freeze nearly everything, especially before big holidays, this is one side dish that I don’t recommend freezing. I’ve found that the the sprouts tend to get a big mushy after defrosting.

However, if you have a ton of miso butter Brussels sprouts leftover and they’re at risk of going to waste, you technically can freeze them for up to six weeks. The texture won’t be quite the same when you defrost and reheat them, but the flavor and nutrition will still be great.

What to serve with miso butter Brussels sprouts

The miso butter Brussels sprouts will pair nicely with so many holiday dishes. Here are just a few of the ones that I’d like to try them alongside:

No matter how you choose to prepare the sprouts, here’s how you’ll make them. 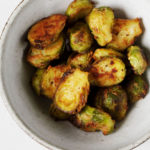 It’s funny: I love vegan roasts, loaves, stuffed squash, and other holiday mains. But the thing I always hear about Thanksgiving, especially in relation to veganism, is that it’s the side dishes that really make the meal.

I can’t argue with this. From cauliflower to kale, stuffing to sweet potatoes, traditional Thanksgiving sides are a real treat. And now I have a new favorite Brussels sprout dish to add to my rotation.

Hope you’ll come to love the recipe, too.

Essential oils for travel (and other vacay must-haves)