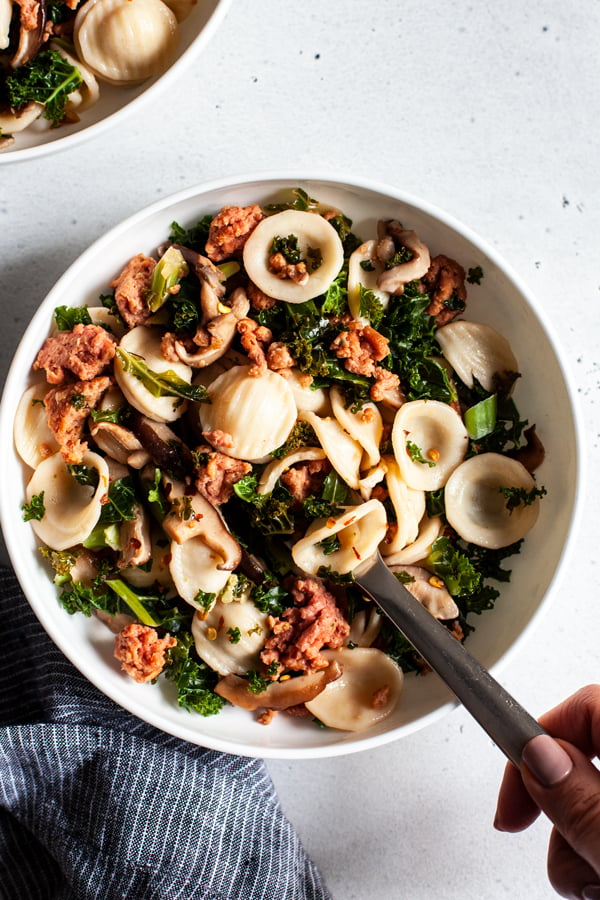 This pasta dish is awesome, but the title isn’t meant to be quite that self-celebratory 😉 It’s a reference to the new SweetEarth Foods Awesome Grounds, which are responsible for most of the plant protein in this very nutrient-dense meal.

There’s no easier or more comforting dinner than a vegetable-packed pasta dish, but the downside is that they’re not always rich in protein on their own. When I make pasta suppers for myself, I almost always end up adding beans, plant meats, tempeh, or tofu to the dish. The new SweetEarth Foods plant meat is a perfect contender: easy to prepare, an impressive 16 grams of protein per serving, and with a flavor that’s neutral enough to pick up whatever seasonings you’d like in the dish. 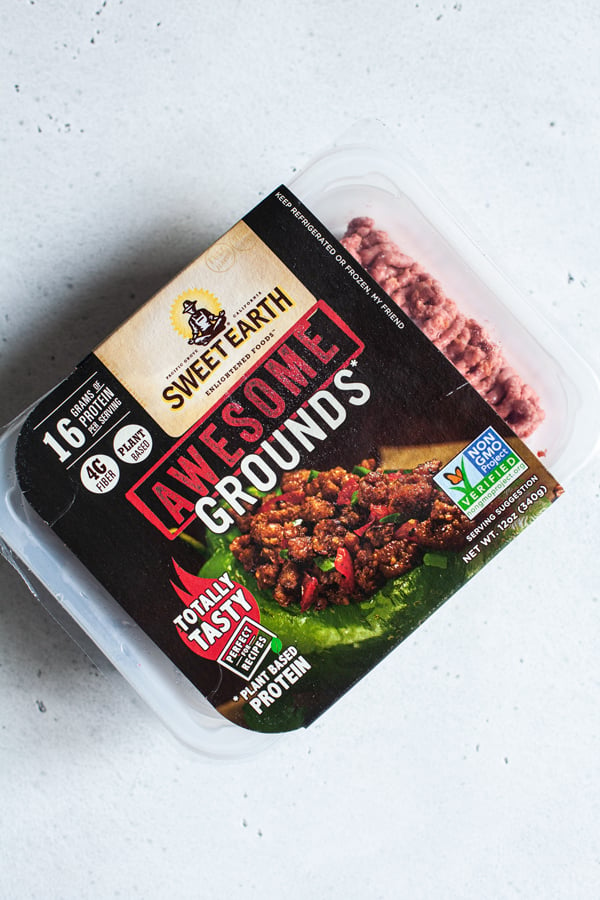 The Awesome plant meat comes in both grounds and in a burger form. The burger is perfect for pan searing and serving on your favorite vegan bun, but I love the versatility of these grounds. I expect to try them in tacos, skillets, and vegan lasagna. The flavor is savory and salty, with some umami, but it’s not super distinctive on its own. This is a good thing: it means that you can play around with smoky flavors, herbs, or bold spices to make the meat fit in with the dish you’re making. 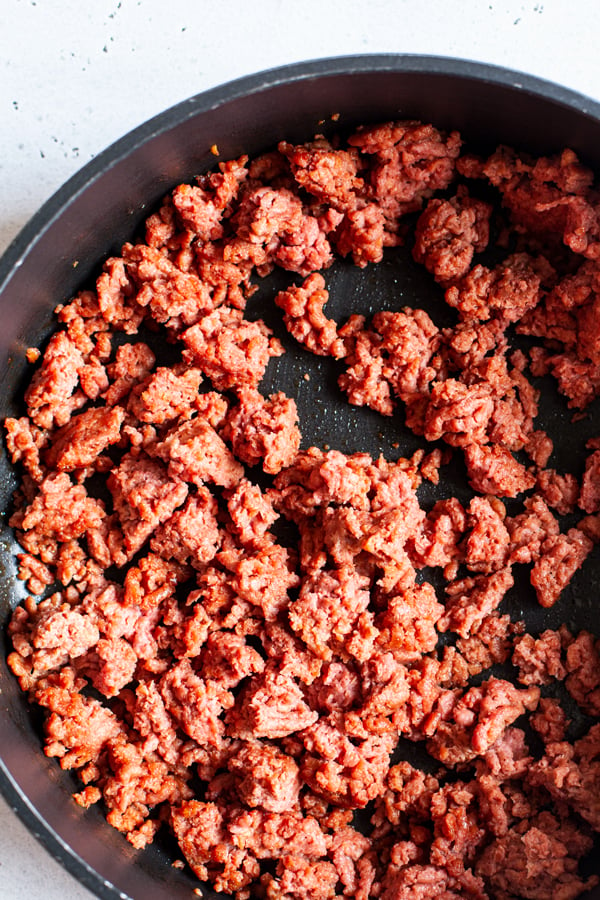 What impresses me most about the Awesome Grounds is the texture. It’s so good: dense but not chewy and incredibly authentic. The instructions for cooking the meat are to sauté it until it’s pink, which is exactly what I did. The color remains relatively pink/red unless you season it with spices of a different color, but mine did get lightly browned in the pan after the full, recommended seven minutes of cooking time.

It’s worth saying how great SweetEarth is as a brand, too. Its seitan is my go-to at home (I love it in these sofrito bowls), and its Benevolent Bacon™ is my favorite plant-based bacon out there. Plus, I love the sweet names of its products: Benevolent Bacon™, Harmless Ham™, Mindful Chick’n. A small detail, maybe, but a reminder of the brand’s compassionate ethos. It makes enjoying the texture and taste of traditional proteins easy for vegan eaters. 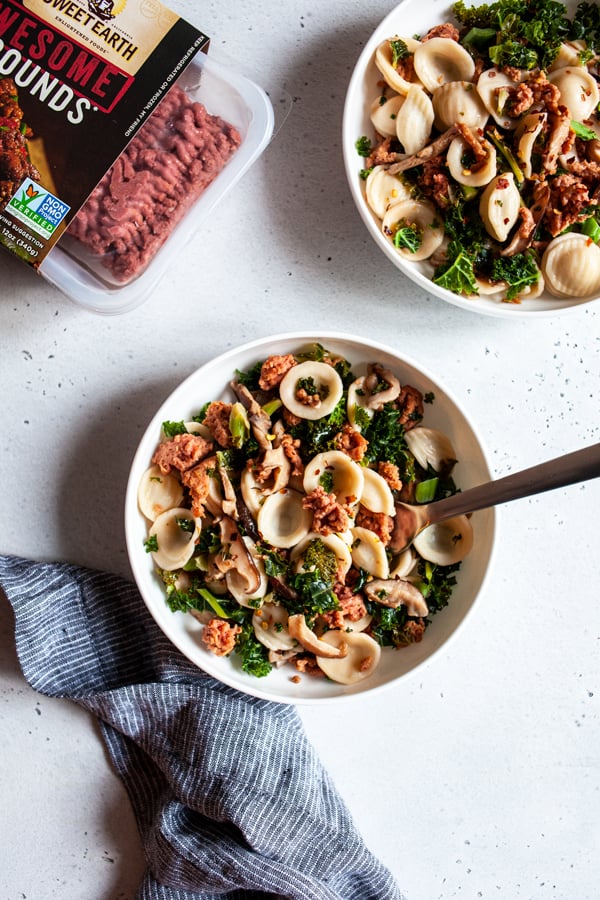 The theme of this pasta is heartiness, and I added both mushrooms and greens to the dish as well as the Awesome Grounds. The finished bowls have tons of texture and color. For ease, I used frozen, chopped kale (I always keep this around for last minute cooking), but you could use any fresh greens that you love. For the mushrooms, I chose shiitakes, which are probably my favorite, but this is flexible, too: baby bella, chopped portobello, and button mushrooms would also work well.

I kept the seasonings here simple: plenty of garlic, some lemon, red pepper flakes. Right as I finished the pasta, I added three tablespoons of cashew cream. This is totally optional, but it gives the whole meal just a touch of extra richness and brings it all together. If you don’t have (or want to make) the cream, you can give the pasta a little extra richness with vegan parmesan or grated cheese, too. 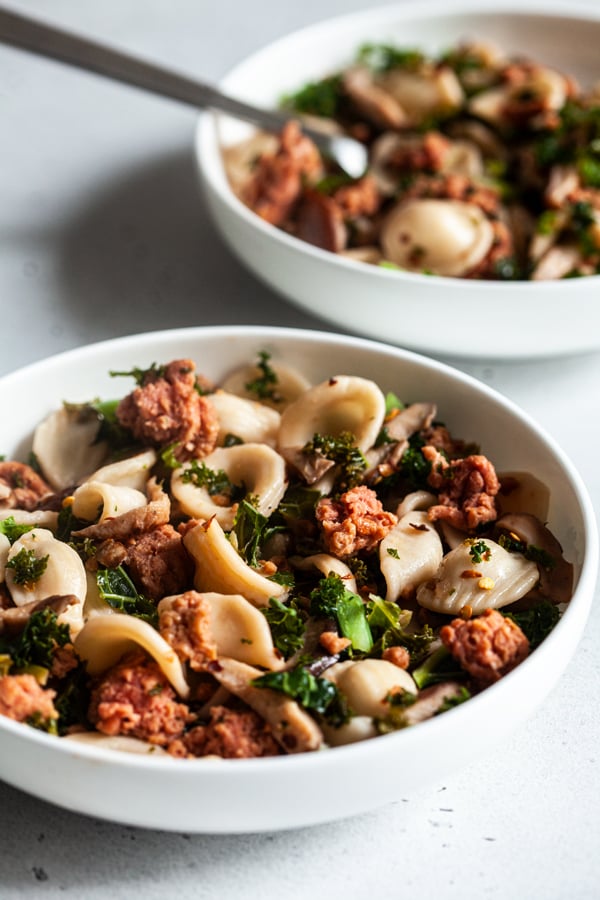 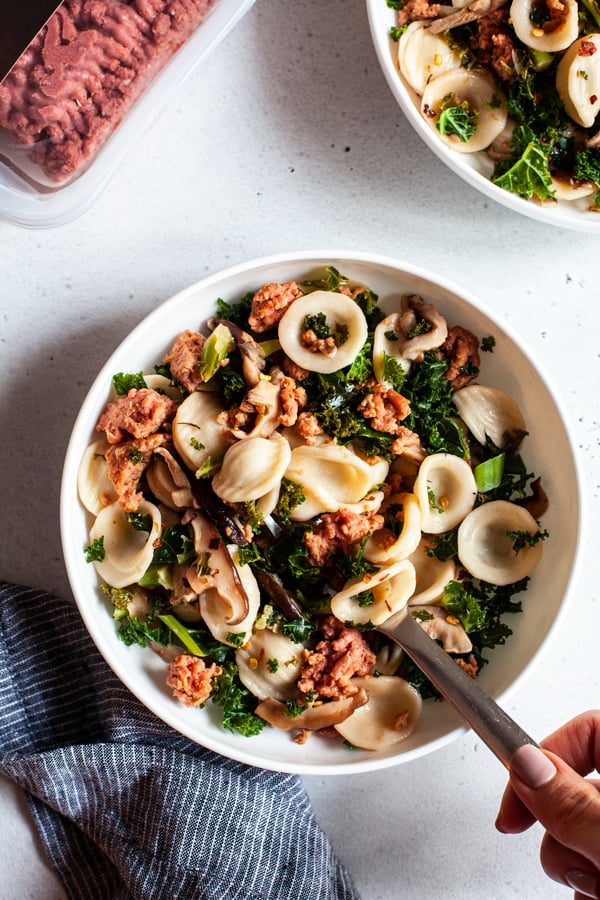 Thanks to the veggies, the plant meat, and the pasta, this is a fulsome and balanced meal on its own. But of course it wouldn’t hurt to serve it with a favorite vegetable side dish, like broccolini, Brussels sprouts, or a leafy green salad.

It’s wonderful to welcome a new plant-based meat into the world. I continue to be proud—and occasionally awestruck!—at the abundance of vegan options these days, with more and more choices for different tastes and needs. Of course, if you don’t have Awesome Grounds on hand, you could use a favorite vegan sausage here, tempeh crumbles, or even cooked lentils in the meal instead.

Happy, nutritious dining, friends. I’ll be back later this week with something pumpkin-themed: I’m hanging onto the season for as long as I can 🙂

This post is sponsored by SweetEarth Foods’ Awesome Grounds. All opinions are my own. Thanks for your support!

How to use Thieves Essential Oil